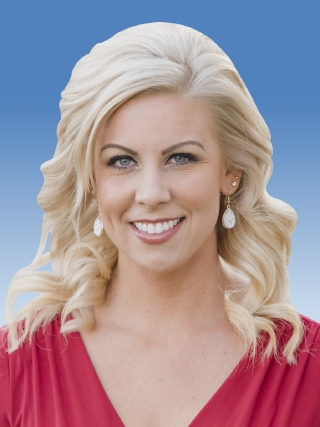 Chloe decided she wanted to join the news business when she was 16 after a reporter in Seattle did a news story about her family surviving a house fire. "The story changed my life completely. At the time my dad was dying of cancer and we had lost everything. It changed my life because people - strangers, came together and helped us rebuild at a time when we were in need. If I can do a story like that to help someone else, I want to make a career out of it."

So, she did – Chloe pursued her journalism career by attending school at Washington State University where she earned two degrees in Broadcasting & Political Science. Chloe went back to school after discovering her passion for meteorology and completed an Operational Broadcast Meteorology Certification through Mississippi State University.

Volunteering for the American Red Cross is something Chloe likes to do in her free time along with promoting the annual “Sound the Alarm, Save a Life” campaign which encourages people to install working smoke alarms in their homes. This is Chloe’s way of giving back after the Red Cross assisted her family after a fire destroyed everything they had. Chloe also likes to volunteer at schools to teach students about weather, reading and higher education. She also enjoys traveling, hiking, camping, and indoor cycling.

One of Chloe’s biggest career highlights was covering the 2016 Summer Olympics in Rio de Janeiro, Brazil for Sinclair Broadcast Group where she was able to interview athletes like Olympic Gold Medalists Ryan Lochte, Cody Miller, and Olympian Jake Dalton. She also has a passion for the Winter Games and has covered stories with 2X Olympic Gold Medalist David Wise and Gold Medalist Maddie Bowman.

You can catch Chloe’s weather reports weekdays on News 3 Live at 3 pm & 7 pm and on the CW News at 10 pm. You can also follow Chloe on social media where she is an avid poster on Facebook, Twitter & Instagram!