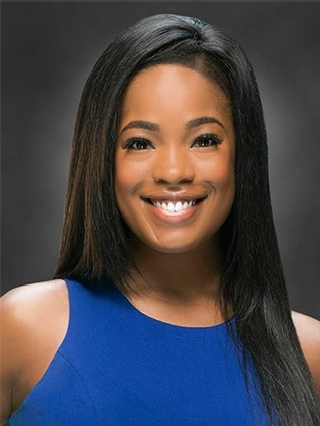 Faith Jessie reports weekdays on News 3. She joined the team in October of 2016.

During her time in Las Vegas, Faith has covered numerous stories that have received national attention. In 2016, Faith jumped right into work with coverage of the final presidential debate between Hillary Clinton and Donald Trump at the University of Nevada, Las Vegas.

The following year, tragedy struck the city of Las Vegas, when a gunman killed 58 people at the Route 91 Harvest Festival. Faith joined the News 3 team to provide nonstop coverage of the mass shooting on October 1st. She was nominated for an Emmy and won an Edward R. Murrow award for her involvement in the station's coverage.

In 2018, Faith traveled to various cities in Germany, including Berlin, in partnership with Radio in the American Sector (RIAS) and The Radio, Television, Digital News Association (RTDNA) to explore the differences in German gun reform from American gun laws. The series, “Comparing Gun Control” aired in the Las Vegas television market along with other television markets in America. The series, also posted online, received international attention.

Faith found herself at the center of the Las Vegas sports boom on variety of assignments, including coverage of the NFL’s Raiders move from Oakland, the NBA Summer League, the inaugural season for the WNBA’s Las Vegas Aces, the inaugural South Point 400 NASCAR cup race, and the inaugural season of the NHL expansion team, the Vegas Golden Knights. Faith followed the team to their historic Stanley Cup final appearance.

Faith comes to Las Vegas from Upstate New York where she was a weekend anchor and reporter at Fox 40. During her time in New York's Southern Tier, Faith followed New York delegates to the Democratic National Convention in Philadelphia, covered the presidential campaign trail, and anchored the 10 pm weekend news while serving as a fill-in anchor during the week.

Faith attended the University of Southern California in Los Angeles. While studying at the Annenberg School for Communication and Journalism, Faith reported for Annenberg Television News (ATVN) and was a founding member of USC's chapter of the National Association of Black Journalists.