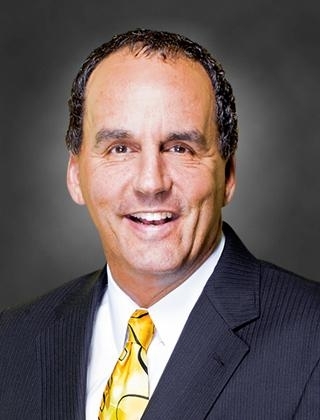 Kevin Janison is a native of Los Angeles where he is an alumnus of Fairfax High School, then California State University, Northridge.

He has held the National Weather Association Seal of Approval since 1985. The Janison family moved to Las Vegas in 1994, where Kevin worked at KLAS until he proudly moved to News 3 in 2007. Prior to Southern Nevada, he worked in Reno; Madison, WI; Evansville, IN; Jackson, MS and New York City.

Kevin's forecasts have dealt with all the curve balls thrown our way in Southern Nevada: 100 year floods to drought. From 8 inches of snow in Henderson to 117 degrees at the airport. From spring winds that have gusted over 90 mph in some neighborhoods to rare fog in the desert. There have been small tornadoes, microbursts, hail and late-night lightning assaults. Who says Las Vegas' weather is boring?

Kevin has been responsible for building the Neighborhood Weather Network, which placed weather stations and provided curriculum in meteorology in over 100 schools throughout the region.

Each year, Kevin visits over 100 schools, giving presentations on weather, being an author, reading and speaking at graduations and DARE culminations. He also volunteers his time to numerous charities and community organizations since coming to Clark County.

Kevin was named National Broadcaster of the Year in 2006 by the National Weather Association. This honor was bestowed based on his on-air work, building and administrating the weather station network and service to the community. It is a very prestigious honor since every TV meteorologist/weathercaster in the country is eligible.

In June 2017, Kevin received his sixth Emmy award from the Southwest Region of the National Association of Television Arts and Sciences. It was his 13th nomination for his on-air work. He has won a "Best Weathercast" award from the Associated Press, "Best On-Air Personality" and seven "Best Weathercaster" awards from Las Vegas' Electronic Media Awards, plus several mentions in the Review Journal's "Best of Las Vegas" annual edition.

In 2006, Kevin was named to the Greenspun Media Group's "Most Influential Las Vegans."

In 2003, the Las Vegas Chamber of Commerce named Kevin, "Humanitarian of the Year." In 2005, he was recognized as a "Citizen of Distinction" by the Foundation for an Independent Tomorrow. He was inducted into the Nevada Broadcasters Hall of Fame in 1999. In 2012 he was included again in "Distinguished Women and Men in Nevada."

Kevin is also an accomplished author of award-winning children's books. The Deputy Dorkface series takes kids' antics and turns them into fast-paced, action-packed, funny adventures, with subtle life lessons. Several of his books have received "Picture Book of the Year" honors, from two different organizations. He shares his stories, plus demonstrates the writing and editing process in schools throughout the country each year. He has been a passionate advocate, inspiring more reading and writing amongst elementary students during his school presentations.

An avid tennis enthusiast, Kevin is often found on local courts. And... to add a little excitement, looks forward to that week each Spring traveling to the Plains to chase tornadoes. Kevin is married to Terri, who is CEO of the Grant A Gift Autism Foundation. They have a daughter, Taylor, and son, Colin.

If you have a story idea, email Kevin at KJanison@sbgtv.com.