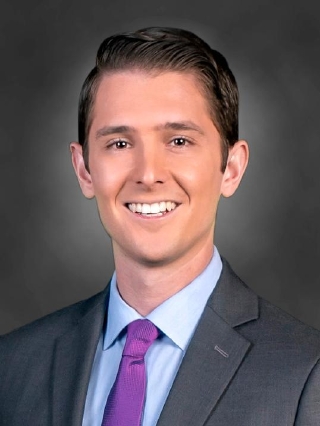 He’s no stranger to the desert. He spent two years at KGUN 9 in Tucson, Arizona, where he was a reporter and fill-in anchor. Occasionally, you’d find him in the weather center or at the sports desk.

Max’s reporting took him all throughout Arizona, and once to Florida, to cover Hurricane Irma. He spent five days there, filing live reports for the days before, during, and after it came through. That was an experience he will never forget.

Another one of Max’s most memorable stories took him into an Arizona State Prison to interview an inmate battling drug addiction from behind bars. This man spent his entire adult life in and out of prison and finally hit a point where he was ready to hit the reset button. He opened up and shared his life story with Max, which was an incredibly inspiring one.

Max is a proud graduate of Syracuse University’s S.I. Newhouse School of Public Communications. Go Orange! He is originally from the Bay Area in California and is thrilled to call Las Vegas his new home. When he’s not reporting, he enjoys playing pick-up sports and the piano.

Max values the importance of good storytelling. If you have a story, send it his way.