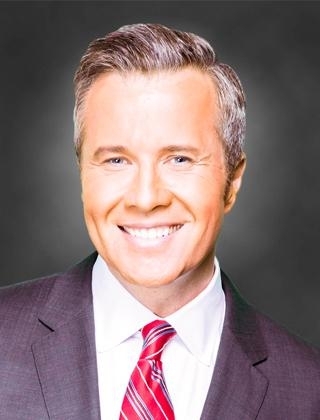 Reed Cowan is an Edward R. Murrow, Emmy and GLAAD award-winning journalist with three decades of experience in broadcasting.

He is also the Sinclair Broadcast Group Olympic Games correspondent, bringing the Olympic Games home to NBC affiliates from Rio de Janeiro in 2016 and PyeongChang, South Korea in 2018 and the Tokyo Olympic Summer games in 2020.

Reed’s special reporting projects highlight the plight of orphans in Southern Nevada through his Wednesday’s Child work, for which he won the 2019 Champion for Change award through the North American Council on Adoptable Children.

Reed also examines the growing homeless crisis in Las Vegas through his award-winning series The Homeless Project, which airs at 6 pm Thursdays.

Reed has covered some of the biggest stories to hit local and network television screens across the country. His work includes covering the Elizabeth Smart case to being the first television anchor on the air in Salt Lake City, anchoring real-time coverage of the terror attacks of 9-11 as well as National coverage of the funeral for President Ronald Reagan.

Reed’s work is best showcased in live, breaking, unscripted, big story coverage, such as the ONE OCTOBER mass-shooting for which Reed won the esteemed Edward R. Murrow award, along with multiple Emmys.

Reed’s journalism knows no borders, as international journalism is also a part of his portfolio of work. In Mexico City, Reed covered economic delegations from the United States. In Haiti, Reed covered devastating natural disasters. In Kenya, Reed covered post-election violence and the building of schools in the Masai Mara for AIDS orphans. In 2018, Reed was one of the last journalists to step into North Korea at the demilitarized zone before North and South Korea peace talks began following the 2018 Olympic Winter Games.

When Reed isn’t on-air, he travels the United States as a professional speaker, having shared the stage with Nobel Peace Prize nominees and former Presidents. Recently, Reed became a TED TALK speaker.

Reed is a sought-after Yoga and Meditation teacher in Las Vegas and has his own inspirational YouTube channel.

Reed's efforts with The Wesley Smiles Coalition and Oprah Angel Network's Free the Children has helped spur on more than two million dollars for schools and water treatment facilities in Kenya.

Reed is most proud of the simple things like being a family man. Reed is the married father of four children, Wesley, Kai, Asher & Rion.

"You want to know me, you have to know my core belief," says Reed. "Every Life has a Story; Every Story has a Lesson and every lesson has the power to change the world. To tell stories, to get those lessons out there and to hold a mirror up to a changing world is humbling. It's a high honor." -Reed Cowan

If you have a story idea, email Reed at RAbplanalpCowan@sbgtv.com.