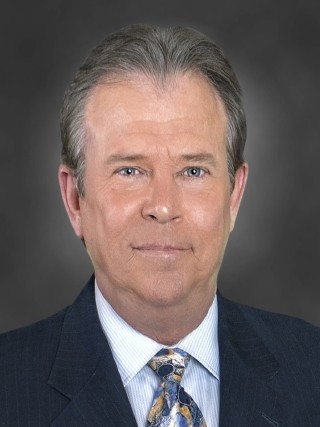 Steve Wolford is a four-time Emmy Award winner and a 2006 inductee into the Nevada Broadcasters Association Hall of Fame.

Steve joined the staff of KSNV in December 2018, and brings more than 30 years of broadcast journalism experience to News 3, including more than a decade in Las Vegas.

Steve's career began at WFTV-TV in Orlando, Florida as a newscast producer/writer before quickly being promoted to morning, then weekend anchor. From there, Steve moved to the Orlando CBS affiliate, WKMG-TV (WCPX-TV) where he became one of the youngest weeknight 6 & 11 p.m. news anchors in the nation.

From Orlando, Steve headed north to anchor the midday and 5 p.m. newscasts at WEWS-TV in Cleveland, Ohio where he won two Emmy Awards on the news/talk show, "Live on Five." During his 3-years on the show, Steve interviewed countless celebrities including rock icons Ozzie Osbourne, Jimmy Buffet, and Grace Slick, along with Hollywood legends like Charlton Heston, John Ritter and Jay Leno.

Steve then returned to Florida as the weeknight anchor for WPEC-TV in West Palm Beach where he covered two of the biggest stories of the decade; Hurricane Andrew and the first Persian Gulf war. Steve filed a series of reports from Tel Aviv, Israel with first-hand accounts of Iraq's SCUD missile attacks. While at WPEC, Steve also field-anchored the ABC affiliate's live coverage of 25 Space Shuttle Launches from the Kennedy Space Center.

From South Florida, Steve headed to Southern California to anchor the 4 p.m. newscast at KABC-TV in Los Angeles, just in time for two more major news stories; the devastating Northridge Earthquake and the O.J. Simpson murder trial. Steve's career then took him deeper into Southern California, as the primary anchor at KGTV-TV in San Diego.

Then, it was back to South Florida to anchor weeknights at the CBS-owned WFOR-TV in Miami. During his 5-years in Miami, Steve picked up Emmy number-3, and filed live reports from the Johnson Space Center in Houston, following the Space Shuttle Columbia disaster. Steve was awarded a fourth Emmy here in Las Vegas for his station's live breaking news coverage of the 1 October shooting.

During his career covering the U.S. Military, Steve has had the rare opportunity to fly in the backseats of several USAF and Navy jets including an F-16B Falcon, TA-4 Skyhawk, FA-18 Hornet, and a T-38 Talon. He has also had the chance to land on the deck of the aircraft carrier USS Abraham Lincoln to file reports on U.S. Naval training operations based out of Coronado Island.

Steve is a proud graduate of the University of Central Florida in Orlando where he played three seasons of varsity basketball for the Knights. He is even more proud of his most important assignment in life; taking care of his two young daughters who currently attend school in Henderson.