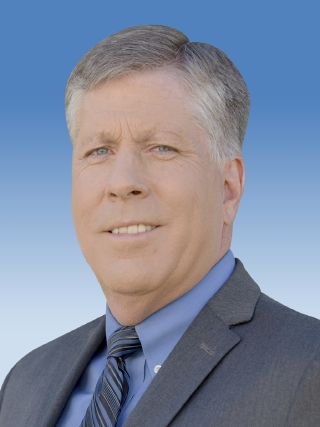 Tom Hawley can claim to be a Las Vegas native, having been born in Las Vegas, New Mexico. He started spending summers in Las Vegas at age 5 and has spent most of his life in Southern Nevada. Tom is a graduate of Rancho High School in North Las Vegas and has a B.A. in Communication Studies from UNLV.

After a few radio and TV jobs in the mid-80s, Tom has been reporting traffic from a helicopter and the studio since 1988 and joined the News 3 family full-time in 1995. In addition to covering current traffic conditions, Tom does feature reporting on transportation issues. He also covers outdoor adventures and local history with the weekly "Video Vault."

The high points of Tom's career thus far are experiences in Europe as a two-time fellow with the RIAS-Berlin German-American Journalist Exchange Program (2003 and 2009). He was also a participant in the American Council on Germany’s 2013 Climate and Energy Tour.

In 2002, Tom was inducted into the Nevada Association of Broadcasters Hall of Fame. In 2014 he was awarded an Emmy for breaking news coverage.

Outside the workplace, Tom's two passions are music and outdoor adventures. These days he plays String Bass with the Henderson Symphony Orchestra. Tom's hiked the slopes of Mount Kilimanjaro and zip-lined the rain forest in Costa Rica. You can often find him going for the peak of a local mountain on the weekends.

If you have a story idea, email Tom at THawley@sbgtv.com.